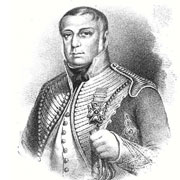 Colonel James Skinner CB, who was also commonly known as ’Sikandar Sahib’ was the son of Hercules Skinner and a Rajput woman. His father started his military career as a country cadet with the 19th Native Infantry in the year 1771. James Skinner was born in 1778. Though he wanted to be a soldier, James Skinner could not serve as an officer in the East India Company’s army, due to his mixed parentage, but this did not deter the young man. He procured a letter of introduction to Benoît de Boigne who was a French mercenary who commanded a part of the army of the Maratha chieftain Daulat Rao Sindhia. De Boigne was impressed with the personal qualities of the young man as well as by the ancestral background of the Skinners, who traced their lineage from an ancestor who had served William the Conqueror, the first Norman King of England during the 11th century. James Skinner was thus enlisted in the Maratha Army as a low rank officer at the age of 18 years.

With the outbreak of the Anglo-Maratha War, James Skinner along with other British soldiers, were treated with suspicion within the Maratha army. He was therefore forced to leave, and subsequently came over to the side of the British Indian Army under the command of Lord Lake.

In the second half of the year 1803, after the defeat of the Marathas at Delhi, some of the cavalry who had earlier been part of the Maratha Army, came over to the British side. When they expressed their desire to be placed under the command of Skinner, he agreed to lead them, on the condition that he would never be expected to fight against Sindhia, in whose army he had served. The cavalry regiment under Skinner became an ‘irregular’ regiment under the British Army, known as ‘Skinner’s Horse’ or ‘Yellow Boys’, as their uniforms were yellow in colour. This regiment of cavalry is still a part of the Indian Army. Skinner’s Regiment is the only regiment in the world which is operating both in the Indian Army & the British Royal Army.

After many years of service James Skinner finally won a battle against the prejudices of British officialdom and was given the rank of a Colonel. Once he retired from active service, he divided his time between his jagir at Hansi (Haryana) and Delhi. In Delhi he built a large mansion near Kashmiri Gate. The house no longer exists.

James Skinner built the edifice at his own personal expense of 95,000 Rupees of those times, under the design of Major Robert Smith. The construction started in 1826, and was completed in 1836. He took personal interest to get the new building dedicated as a church and got it consecrated in honour of Saint James by the Bishop of Calcutta, Daniel Wilson who was passing by Delhi on 21st November 1836. Skinner’s greatest greatness lies in the fact that to express his gratitude to God, he not only built the church but even generously donated and gave away the grand building and the land in entirety to the Church. He was honoured as the builder of the church and after his death on 4th December 1841, and first burial in the Cantonment Burial Ground at Hansi, after a period of 40 days was disinterred, his coffin brought to Delhi, escorted by 200 men of Skinner’s Horse and laid to rest, near the Altar on 19th January 1842, as per Skinner and his family’s wishes and agreeably to the Lord Bishop’s faculty and authority.

John Mitchley Jennings (8 June 1806 – 11 May 1857) a minister of the Church of England and Founder of the Society for the Propagation of the Gospel’s Mission to Delhi, as Chaplain to Delhi, was taking care of the services and giving pastoral care to the mixed worshiping community of the expatriate Europeans and Indian converts since 1851, took over the charge of the edifice after Skinner. The basic design of Renaissance Revival style church is on a cruciform plan (Greek Cross), with three porticoed porches, elaborate stained glass windows and a central octagonal dome, similar to that of the Florence Cathedral in Italy. The copper ball and cross on the top, which are said to be replica of a church in Venice, were damaged during the 1857 revolt, and were later replaced. A special service was held in 2003, to commemorate 200 years of Skinner’s Horse, the cavalry regiment raised by Skinner in 1803. Amongst those present were Margaret Skinner, great great granddaughter-in-law of Skinner, Admiral Sushil Kumar, retired Chief of Naval Staff, Col. Douglas Gray who commanded Skinner’s Horse from 1935 to 1947, and several former British officers.

It is said that the land on which the church stands was once part of a mango grove owned by Mughal Prince Dara Shikoh. Later Skinner got it and got built the church in the site where today it is mostly grass and gravel. On the north side of the church building is the plot that was assigned as the Skinner family graveyard, where most of Skinner’s wives and children are buried. A monument stone dated 12th March 1856 mentions about its allocation and allotment done by the then Bishop of Calcutta and Metropolitan in India Bishop Daniel Wilson. The compound also has the graves of Britishers such as William Fraser and Thomas Metcalfe. During the revolt of 1857, hundreds of named and unnamed British and native residents belonging to the Christian community within the walled city of Delhi and around, were targeted and killed in the streets, the church was also badly damaged, and it’s early records and books were destroyed and records burnt. Later a memorial giant cross was erected in the church garden which stands even today as a living witness of the faith of the dead.