St James’ Church lies in the north-eastern part of the old Mughal city of Shahjahanabad or Old Delhi (Delhi -6) as it is know nowadays. This area is popularly called Kashmiri Gate, after the doubled arched gate in this part of the city wall. The gate was so named because it lay to the north, facing the province of Kashmir. During the Mughal period, this area was occupied by the mansions of the highest nobility of the empire, inculding the palace of Dara Shikoh, the favourite son and heir of the emperor, Shahjahan. It also contained the mansion of Ali Mardan Khan, a high noble at the Mughal court. These mansions were set within large gardens, and therefore this area was quite open and green compared to the more densely built up areas in the rest of the city.

The importance of this area continued when the British East India Company gained control of the city in the early 19th century. The old Mughal mansions were occupied by high British officials, who modified them by adding colonial aesthetics and extensions. Apart from the homes and offices of British officialdom and the Indian elite, the Kashmiri Gate area also became the site of the Law courts, the first western style college in the city, the church, and an early British cemetery. Therefore, this area became a focus of administrative power as well as of social change. From the late 19th century, government functions began to move out of this area, to the Civil Lines, and later to New Delhi in the second quarter of the 20th century. Nevertheless, it continued to be a desirable place to live, a commercial centre, as well as an educational hub, with the establishment of the St Stephen’s College and Hindu College in the late 19th century. 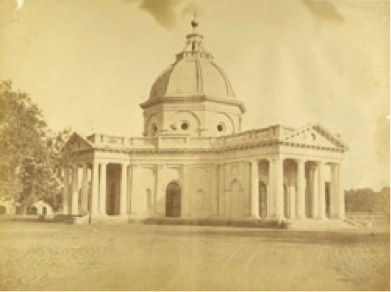 St James’ Church, photographed by Robert and Harriet Tytler in 1858. St James’ Church was commissioned by Colonel Skinner (1778-1841), a distinguished military officer, famous for the cavalry regiment Skinner’s Horse, previously known as the Yellow Boys because of the colour of their uniform. While lying wounded on the battlefield, he took an oath that if he survived, he would build a church as a thanksgiving to God. The church was designed by Major Robert Smith and was built between 1826-36 to a cruciform plan, with three porticoed porches and a central octagonal dome.